A new loadout on "Call of Duty: Warzone" might be the most powerful and broken one just yet. The popular shooting game, which is available on PC, Xbox Series X/S. Xbox One, PS5 and PS4, recently received some new powerful guns that changed its mechanics.

However, several players are exploiting these latest weapons, giving them huge advantages on the battlefield. One of these is the latest AUG loadout, which was revealed by Nick "Nickmercs" Kolcheff, a popular "Call of Duty" streamer.

He claimed that it is one of the most over-powered loadouts in the shooting title right now. According to Comicbook's latest report, the leaked AUG loadout has surprised many long-time "Call of Duty: Warzone" fans.

Why? Because players don't consider burst-fire weapons as part of the current meta. To give you more idea, here's how powerful the new AUG loadout is:

Nickmercs claimed that the new AUG loadout can eliminate opponents without emptying the gun's magazine. This means that you only need to squeeze the trigger a few times. However, the damage you will deal with will still rely on the first-shot accuracy. 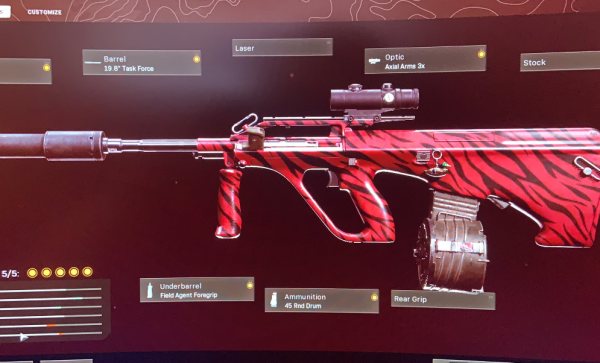 (Photo : Screenshot from Twitter post of @oswalt1026)
'Call of Duty: Warzone' New AUG Loadout Review: Streamer Claims It's the Most 'Broken' One!

The streamer also released a YouTube video to show the needed gun accessories for the latest loadout. These include a 17-inch Titanium barrel, the Axial Arms 3X optics, and the Infancy Compensator muzzle. On the other hand, you can also complete the loadout by adding .45 RND Drum ammunition and the Field Agent Foregrip.

The leaker claimed that this weapon setup will give you a boost to accuracy and range. Nickmercs added that the latest AUG loadout is best for those who rely on shot accuracy. This means that players who rely on movement might not find this loadout useful.

On the other hand, it was clarified that the new loadout still doesn't make AUG ideal for close-range encounters. Instead, this loadout makes AUG an OP weapon when it comes to close-range or mid-range fights.

Aside from the latest AUG loadout, there are also other OP weapons that are already powerful without any specific loadout needed. Here's the complete list of the meta-changing guns in "Call of Duty: Warzone," as reported by PC Games;

If you want to know further details of these guns, all you need to do is click here.