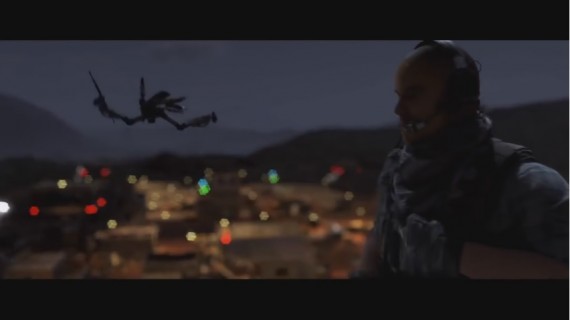 Ubisoft is really sticking to their new philosophy on giving players more freedom while in-game. To start with, they allow full drone customization for Ghost Recon: Wildland players. Read here to find out more. (Photo : AmperCamper/YouTube)

A video game storyline will never be complete without a sidekick, a dog, a robotic aid, or a drone. Okay, maybe some games like to be in solo mode but the point is having extra assistance adds zest to a game. Shooters today have become reliant to companions, either a buddy, an animal, or a robotic being, they help us out on our missions as we go through a very challenging level. It will be nice to give something in return, like customizing your companion to look nice of bad-ass, whichever works.

I loved customizing that dog from Fallout 4, with all its useful armor and stuff. If you are fond of customizing your companion drone then Ghost Recon: Wildlands is your game, but you need to wait until next year. Ubisoft has decided to give away drones for each player to utilize, and it is confirmed on a post by We Write Things.

It seems that Ubisoft is getting into fashion as what they did with Watch Dogs 2, they are now allowing customization for your drones in Ghost Recon: Wildlands. Kidding aside, the game allows you to mix and match drone abilities for offense, defense, recon, and any tactical terminology you can think of. This is also confirmed by the same post as Eric Couzian, creative director who spoke about drone customizations.

Couzian says that you can tailor your drone by which playstyle you will choose. You can also upgrade its recon abilities by refining its uniqueness; add camera mods such as thermal or night vision, change lenses for zoom, and other cool stuff. He also adds that, "You can also use the drone for diversion by putting devices which will generate sounds to lure enemies."

Drone servos or 'engines' can also be customized to make it more silent, EMP bombs are also featured for the drones. On assault play, you can add explosives and blow everyone who gets in its way and as defense, you can increase its armor (with a cost of mobility, probably). Couzian wants to emphasize that a variety of customizations are available depending how the player likes his/her drone. As part of their new corporate direction, they want to give more freedom to their players in terms of drone gear, not trap them into the boringness of linear stuff.

At this point, I am thinking that either the drones will play an important role in Ghost Recon: Wildlands, or maybe it's just one of their followed directive. Under their new design philosophy, they'd give more player freedom. A cute feature such as drone customization will no doubt put a smile on every Ghost Recon gamer's face and I'd expect tons of YouTube videos about it, from plain fandom to trolling opponents.

Ubisoft will start rolling out Ghost Recon: Wildlands in March 2017 so ready those pockets as I expect DLCs will be implemented for those who are pretty serious about modifying their faithful drones. What do you think about the company's 'more freedom' philosophy? Hit us with your thoughts via the comments section below. Until then, keep gaming.

Enter the promise land of mid-gen gaming. PS4 Pro and Project Scorpio are going to flex those muscles with their powerful things, whatever that is. The point is, expect Ubisoft to harness their full powers.

Dishonored 2 Review: There Is No Correct Way To Play The Game

There are games that just leave you with all the goodies for killing and it's up to you on how to use them. Dishonored 2 is definitely one of them, mix and match your abilities and be creative on your kills.

A lot of people are wondering where'd Aiden go after Watch Dogs. Alright, a few people, are wondering, including me. Well, he did make a cameo in Watch Dogs 2. Find out here.

For a limited time only, get your FREE Assassin's Creed II Game for PC on Uplay! Grab yours now!