Google Daydream And Pixel XL: Are The Market's Latest Entries Worth A Look Before 2017? 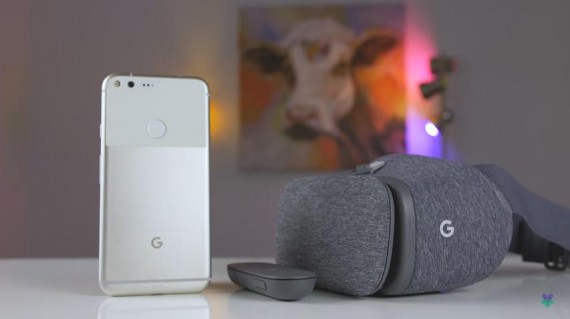 Google definitely started to expand its range of services this year - especially with the introduction of the Google Daydream and Google Pixel XL. But just how do they stand out in the industry?

This year, Google stretched outs its arms and entered segments of the tech world that it never had before. With the growing virtual reality trend, the company released the Google Daydream, its answer for mobile VR gaming. It also released the Google Pixel XL, a high-tier smartphone that debut the line.

The Google Daydream puts itself up directly against the likes of the Samsung Gear VR, as it needs a mobile device to be played. One of the biggest selling points of this type of VR offering is that users can experience virtual reality anywhere. Moreover, there is no need to purchase the latest and most powerful tech machines.

As C|Net notes the Google Daydream is a soft cloth eyebox that, when partnered with any capable smartphone, turns into a VR headset. It is purchased with a motion controller, which wearers can use for manipulating various options and accomplishing tasks within the virtual reality world. Overall, the device offers an exceptionally stellar but easy entry into VR.

The images from the headset are clear and spectacular considering how young an industry virtual reality actually is. Granted that no one is going to be fooled into thinking they really are something else while wearing the headset. However, it still provides a great and fun experience.

The setup is easy adds to the appeal of the Daydream. Not only is it comfortable to wear, but the is hardly any fuss during use as well. Opening up the front door of the headset,which houses the controller when not in use, allows users to easily slip in the compatible device. After adjusting the straps for comfort and the image for clarity, users need to only hold down one button on the controller to calibrate the device and start playing.

A lot of the steps that other VR devices require - such as adjusting lenses, tedious pairing procedures and handling various cables and wires - are disregarded. The headset itself automatically pairs with the inserted smartphone. However, at this point, the Daydream is only compatible with a Google Pixel or Google Pixel XL unit.

But while having to purchase Pixel XL might be a bit of a let down, it is softened by the idea that the Google smartphone is still considered as one of the best to come out this year. It has a lot of power, which is packaged into its sleek and modern design. In all means, device is tough competition.

As noted by Android Authority, the Google Pixel XL has a 5.5 inch AMOLED screen, which has a 2560 x 1440 pixel resolution. The display itself is reportedly fingerprint and smudge-resistant and is protected by Gorilla Glass 4. From the get go, is clear that the search engine giant made no shortcuts with the device.

It is also powered by the Qualcomm Snapdragon 821 processor and Adreno 530 GPU, which arguably makes it one of the most powerful smartphones in the current market. Moreover, it has 4GB of RAM and comes in 32GB and 128GB storage options. Unlike most other Android devices, the Pixel XL does not sport a microSD slot.

The rear and front cameras are 12.3 megapixels and 8 megapixels respectively. The battery, which cannot be easily removed, is at a reliable 3,459 mAh. Furthermore, it has a fast charging feature that will reportedly allow for 7 hours of usage with just 15 minutes of charge. The Pixel XL has a USB Type C port, as well as a USB 3.0 port for data transferring and a 3.5mm audio jack.

As the first generation to play on consoles gets older and older - and as technology continues to develop - there is a growing thirst to go back to roots, which the NES Classic Edition and Retro Freak are both capable of quenching.

Its The Era Of PlayStation 4: Why Now Is The Best Time To Invest On The Console

Despite being three years old, there is no denying that Sony’s PlayStation 4 is still a great piece of technology that is worthy of battling it out with the most modern of consoles.

Google has decided that this year’s version of Android is significant enough to bump the version number up one full step. We might not know the candy nickname yet, but we can be sure that this is version 8.