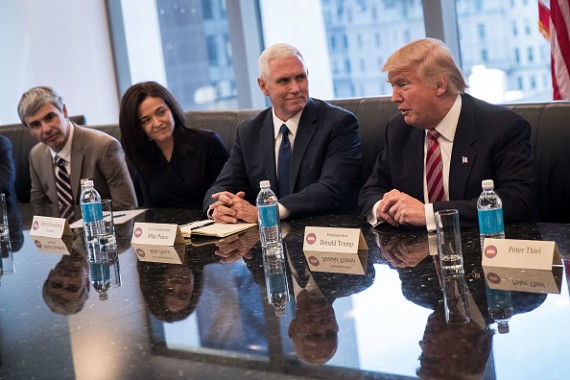 Donald Trump recently met with some of the greatest minds of the tech world and vowed to be of help to them in the future. Meanwhile, hundreds of tech employees have vowed not to help the US president-elect build the future that he promised (Photo : Drew Angerer/Getty Images)

US president-elect Donald Trump recently a meeting with some of the greatest tech minds in the world at the Trump Tower in Manhattan. There, he met with Jeff Bezos of Amazon, Elon Musk of Tesla and SpaceX, Tim Cook of Apple, Sheryl Sandberg of Facebook, Larry Page and Eric Schmidt of Alphabet and Satya Nadella of Microsoft - to name a few. After months of berating these same companies, Trump cleared the air and confirmed he would be there to help.

"This is a truly amazing group of people," Trump as quoted saying by The New York Times. "There's nobody like you in the world. In the world! There's nobody like the people in this room." He then went on to assure these same people that if there was anything the US government could do to help them, that he would make sure it was provided. "I'm here to help you folks do well," he said.

Many feared that Trump would bring up the creation of a Muslim database, which he spoke about during the election. However, the publication made no mention of this. Instead, the business mogul and tech executives discussed vocational education - that there should be more of it - as well as the perils and promise of trading with China. Trump also brought up the possibility of using technology to detect and solve government waste.

But even if Trump brought up that infamous Muslim database and if - a large if - a tech company were to accept the project, hundreds of employees have already vowed not to work on it. As USA Today reports, over 600 tech employees, some of whom are employed at Google and Twitter, have pledged not to get their hands dirty with a Muslim registry.

"We are choosing to stand in solidarity with Muslim Americans, immigrants, and all people whose lives and livelihoods are threatened by the incoming administration's proposed data collection policies," it reads. "We refuse to build a database of people based on their Constitutionally-protected religious beliefs. We refuse to facilitate mass deportations of people the government believes to be undesirable."

Some might argue that such a pledge is too much, that believing each of Trump's statements is a little illogical. But while setting up a profiling system like that is far fetched, the fact is that it has already been a reality. As PRI.Org notes, there was a profiling system in place following the 9/11 attacks on the World Trade Center in New York.

The National Security Entry-Exit Registration System kept tabs on men, who were aged 16 to 45 from 45 different countries - all of which held a large Muslim population, except for North Korea. These men were required to present themselves to government officials if they were given non-immigrant visas. This included students and workers.

The possibility of this being brought back is not impossible. However, the pledge of hundreds of tech employees creates some distance from that and reality. "What's important to me is that individuals who care about the ethical use of technology can step forward, show how many of us there are and say that there are lines we will not cross," said Ka-Ping Yee, a software engineer at Wave.