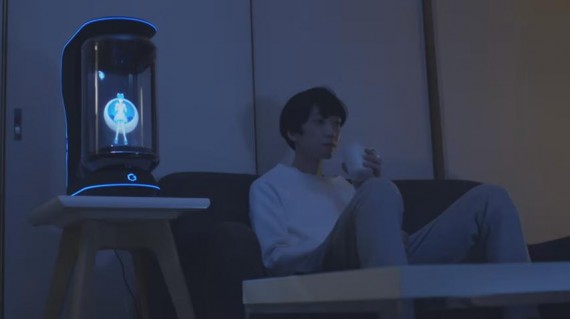 The smartspeaker and virtual reality industry has gotten quite tough because of the battle between the Amazon Echo and Google Home. Nevertheless, a new Japanese product sports one feature that neither of these two products can boast at this point. (Photo : info vinclu/YouTube)

Earlier this year, Google Home entered the smartspeaker market and has proven to be tough competition for the reigning Amazon Echo. But while these two battle it out in terms of third-party partners, conversation quality, and quickness, a Japanese company has just released a new product that has one feature neither device currently has. Vinclu Inc.'s Gatebox displays a 3D anime character called Azumi Hikari.

As noted by Rocket News 24/7, Gatebox is a portable machine that is home to Azumi Hikari, who connects to several household devices This covers things from a television set, computer, lights and more. The unit is quite pricey at US$2,800, but the publication argues that it is so much more than the standard smartspeaker and virtual assistant.

A video from the company indicates that Gatebox will be able to communicate with its owner even while they are out of the house. This happens via text messaging, where the user can send changes or suggestions to their schedule. Azumi then replies like a regular person, as it jokingly replies and makes comments as well.

Requests can also be made, as users can request Azumi to clean up areas of the home or turn on the lights. As mentioned earlier, this is because Gatebox can connect to various appliances, including a cleaning Roomba. In these instances, Azumi will also confirm receipt of instructions.

In this sense, Gatebox offers something that neither the Amazon Echo nor the Google Home can provide: A level of companionship. More than opening up the television or searching online for answers, Azumi replies in friendly ways, thereby eliminating the feeling of speaking to a robot. Instead, it is like the user speaks with the device.

The Amazon Echo can boast of its number of Skills - features that directly correlate to third party developers such as Uber and Spotify. Meanwhile, Google Home arguably has the better communication feature as it can ask questions back and forth. However, neither of these products speaks back in a way like Gatebox does.

As Fortune notes, there is definitely a level of creepiness that the Gatebox comes with as well. At the end of the advertisement, the owner even tells Azumi how much comfort she has provided. "You know, while I was on my way home," he said while in bed. "I thought 'It feels great that someone's waiting for me.'"

Whether the world is ready for this type of technology - where a robotic product can act like and provide the comfort of a significant other - is definitely up for debate. But the publication notes that it only highlights the biggest problem of Japan. That is, that the younger population is refusing to make real interactions and romantic relationships with their peers.

In 2005, a shocking 72 percent of Japanese men under the age of 30 had never been married. It is estimated that within 20 years, a third the Japanese male population will remain single for the rest of their lives. And in a country struggling with a disappearing population, items such as Gatebox only help the issue.