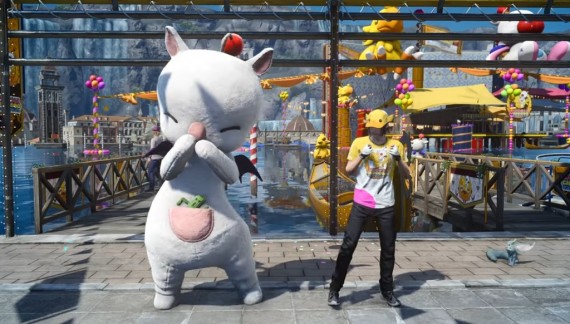 Square Enix has revealed what the upcoming Moogle Chocobo Event for "Final Fantasy XV" will be with Noctis giving us a tour of the anticipated festival. (Photo : Final Fantasy XV/YouTube)

Fans of the recent "Final Fantasy XV" are in for a treat as Square Enix has just revealed that it will be holding a special event starring the popular characters of the "Final Fantasy" video game series. Square Enix recently announced that it will be holding a Moogle Chocobo Carnival event by end of this month. With that, they have just released a new video teaser featuring Noctis going around the said joyous fair and unveiling all the new stuff that players can look forward to.

Square Enix just recently affirmed that a new up and coming event called the Moogle Chocobo Event will be held for "Final Fantasy XV. The in-game occasion has been announced with a picture teaser hinting Altissia garbed in colorful confetti and many more paraphernalia for the event. Now, the video teaser that Square Enix has just released reveals more of the said in-game event and gives players a tour of the festival.

Square Enix has unleashed the new video teaser for "Final Fantasy XV" Moogle Chocobo Carnival and invited everyone to join the fun. The teaser started off with his royal highness, Prince Noctis walking along the port of Altissia to meet a whole new city clothed in all sorts of colors just for the rare festivities. Noctis, clearly surprised and probably someone who does not prefer such crowded occasions, is taken aback wide-eyed, questioning the event. But then he heads towards it to explore the knick and knacks of the carnival and eventually had fun.

The teaser shows Noctis going around alone the water city of Altissia wearing the Chocobo outfits that the Holiday Pack downloadable content is said to release. Hopefully, the other three characters get their own festival shirt, too. The city is lined up with yellow Chocobos, various mascots, yellow and pink paper banners and balloons, and well, the city is practically painted in pink and yellow. Aside from celebrating the existence of Chocobos and Moogles, popular in-game icons are also present such as the Crow's Nest fast food franchise, with its mascot trotting the paths of Altissia.

The popular colosseum of Altissia turns into a mini carnival called Tiromatto that houses a mini game as a target shooting in first person shooter view featuring the in-game daemons. Chocobo races and new fishing quests are up for tries as well just for this event. The gondolas in Altissia have also been painted in yellow and noticeably more intricate with its styling to fit in with the occasion.

Of course, the event will not be complete without new food to try out. Altissia only has one accessible restaurant in the city, which is the Maagho Diner and avid players will be delighted to find out that Square Enix has put up a new area for the Moogle Chocobo Carnival where they serve two special dishes. The Square Enix Café serves Kupoberry Cheesecake, which decreases the damage to fishing lines by 25%, and a slice of the Chocobo-inspired Lemon Pie.

Clearly, Square Enix has proven its point that the Moogle Chocobo Carnival is a huge and vivacious event to look forward to indeed as it will also be implementing the new in-game camera features. The said Carnival event can be accessed through the use of the carnival ticket that goes along with the free Holiday Pack downloadable content. The DLC is available now and the in-game Carnival will kick off on Jan. 23 in North America and on Jan. 24 in Europe and Japan.

Chapter 13: Redemption of "Final Fantasy XV" has drawn many negative reactions but despite it all, the said chapter was essential and should be left as it is and here is why.

Here is a guide on the few secret fishing spots in "Final Fantasy XV" that you can easily miss in the game. Find out where these locations are and fish all you want.