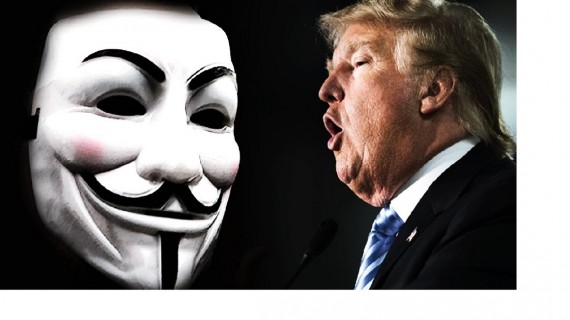 Although Anonymous made some serious threats to Donald Trump during the elections and never execute them, it is quite likely that this time this group will be a real problem for the White House. (Photo : Anonymous Official/YouTube)

Although WikiLeaks absorbed the attention both from the social media platforms and traditional media, hacktivist group Anonymous has been less theatrical and are colder on their actions, making lots of hacks and cyber strikes without receiving the same coverage. Right now, in a moment in which it remains unknown whether WikiLeaks would be an enemy or a friend of president Donald Trump, it looks like Anonymous has officially become the organization that will target his administration. Given this situation, the main question is: could it become a real threat, just as WikiLeaks has been during these years?

Even if the comparison between both groups doesn't seem fair at all, you need to take in mind that Julian Assange´s group has been giving the White House a lot of troubles since it was founded, and considering that WikiLeak might start new relations with Donald Trump, Anonymous is at this moment the organization that represent the rebellious militancy against the U.S. government, despite its lack of glamour and messianic elements that make WikiLeaks some kind of revolutionary brand.

Naturally, there are a lot of differences between both organizations, but the main detail about Anonymous is that this group is way more aggressive in its action, to the point in which they are well known for committing cyber strikes o its targets. Of course, the thing about this particular detail is that even when the damage that Anonymous can cause is extremely threatening, is quite possible that the government already has the proper security measures to avoid it, especially after the presidential elections in which the DNC and John Podesta´s email account were hacked.

Nevertheless, the thing about Anonymous is that the group is way larger than WikiLeaks, and it´s not conformed in a vertical structure with a visible leader on the top, which even when any believes that this is something that makes it quite unorganized, is also the key to being so difficult to fight against.

In fact, it´s known that far from having coordinated attacks, many of its actions are made by its members' own initiative, which makes Anonymous something quite threatening, especially on Twitter, given the fact that in addition to being Donald Trump´s weapon of choice, is one of the social media networks more difficult to control, and so, the perfect one for executing some aggressive actions.

Recently, one of the most famous has been the way in which the hacktivist group shared a way to hack Trump´s smartphone, which is something that even when it won´t create a major incident, it would be a really annoying problem for the White House, and would give Anonymous more notoriety, which is basically the most important thing so its actions have more damaging consequences for the government.

Although Anonymous will probably fall into the temptation of taking advantage of the government´s cyber security flaw, the real threat would be if the group manages to receive classified and harmful information about Trump, and publish it. That´s right, the same actions that WikiLeaks do, but with the powerful element that represent the group´s structure, which would force the government to start a cyber war much more different than anyone it had before.

This is because Anonymous is not a common group conformed by an exact number of members, which means that if some of the main leaders get caught, there will always be more people who will keep with the actions. The reason is that this group is an associated international network, which makes it almost impossible to stop. In short, Anonymous could be a real nightmare for Trump and his administration.

WikiLeaks Blast Against Donald Trump Once Again: Could This Be The Beginning Of A Bitter Relationship?

WikiLeaks has been accused by the U.S. intelligence agencies of interfering with the presidential elections in order to get Donald Trump elected. Of course, the non-profit organization denied the accusations.