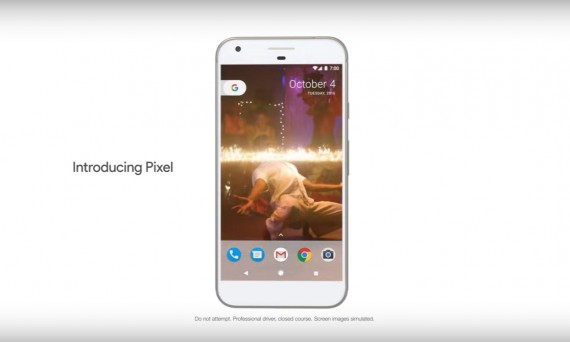 While the Pixel and Pixel XL are arguably two of the best android smartphones released last year, there are still a couple of areas that Google could work on its next iterations. (Photo : Google/YouTube)

A More Awesome And Practical Design

Personally, I think the Pixel's design is plain and boring. Now, I know most of you will disagree with me, but it is to me. Yes, it looks pretty much like a premium smartphone, but it doesn't have that signature look that I could really lust for. In fact, it looks like an iPhone 6 with a weird glass panel on the back. There is also that really blue color casing design that makes me cringe whenever I see it.

So what other things that need improvement regarding its design? Perhaps a little less bezels on the top and bottom - especially at the bottom.

Aside from praying to God that Google will not follow iPhone's steps in ditching the 3.5mm headphone jack for the Google Pixel 2, it would be cool if it will have a better attention to audio.

And based on the comments of Pixel owners, the Pixel phones had horrible audio output from its speaker. Hopefully if Google will not enhance this part of the upcoming Google Pixel 2, it could at least offer some kind of new feature that its users will likely enjoy.

There is no doubt that the Google Pixel has like a really, really amazing camera performance, especially if we talk about taking photos in low light conditions. However, given that the selfie phenomenon is getting more and more popular (thanks to the help of social media sites), it is just normal that we expect Google to further enhance this feature that we love about the Pixel phones.

The Pixel phones are tough, but not as tough if you really want to cause damage on it. And if you want a really tough and rugged looking smartphone, go with CAT S60 that also comes with a thermal imaging camera.

Speaking about damage, the Pixel phones do have an IP58 rating, which means it can take a little splash. But drop it in water or take it out in heavy rain? Well, good luck, my dear friend.

Though there are some videos of people submerging their Pixel phones on water and finding out that there no damage is done, that's not how water damage works. Most modern smartphone exposed to water comes in the form of corrosion, and it takes a few weeks or so to happen. Try it and wait patiently, you will notice it.

The Pixel phones do have accurate sensors and are fast enough. However, when compared to the OnePlus 3T and all of Motorola's 2016 smartphones, it is surprisingly slower. To be honest, I don't understand why this is happening, because the Galaxy S7 struggles in the same area as well. Perhaps you just can't have everything, right?

The Google Pixel 2's Camera Could Be Better Than Its Predecessor

For the Pixel 2's cameras, reports suggests that Google will not be enhancing its camera performance by increasing its MP size. Instead, it will further increase it capabilities by mastering low light photography, having a sensor with higher sensitivity and more.

The HTC U Ultra is the larger and premium model of HTC's latest smartphone release and is worth around $750. It comes with a Quad HD 5.7-inch display with 2560 x1440 pixels.