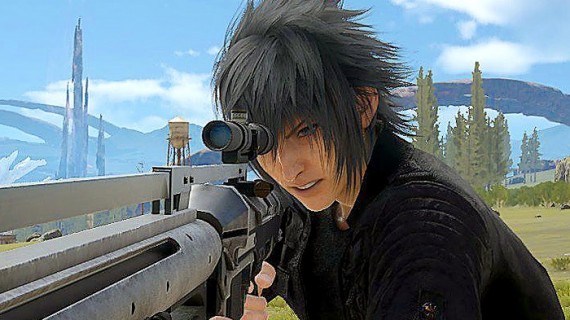 Final Fantasy XV suffers bad frame-pacing issues on the PS4 Pro and here's how to solve it (Photo : Play4GamesHD / YouTube)

Sure, Final Fantasy XV from Square Enix is a great game. (Heck, it might even be the one of the best titles this year has to offer). However, one can't deny the fact that it has its own story to tell when it comes to issues and whatnots. And while it was able to retain most of the key elements a Final Fantasy installment must have, it still didn't manage to stumble in a couple of areas. With that being said, let's talk about the fixes we'd love to see in the game.

According to IGN, director Hajime Tabata is fully aware of the issues the title is currently facing. Hence him and his team are working hand-in-hand in hopes to fix these via updates. This could mean a lot of things, of course. For instance, new story scenes might be introduced. Or perhaps, the studio will resort in offering a couple of gameplay tweaks. Unfortunately, the hardest one to chew is the fact that it's still way off the radar. It means, there's no exact date or timeline as to when these changes can be expected. Well, without further ado, let's go straight to the topic.

A Substantial And Coherent Plot

Almost all Final Fantasy XV players will agree that the game is a quite messy when it comes to its plot. Both the main characters and villains simply lack developments, while the title's world and its history (albeit being such a beauty) is still a mystery. Overall, the plot just seems vague and full of darkness. Because seriously, this game deserves an award-winning plot, one that can make the hairs of your body stand.

First off, the game is a non-stealth game. So, why in Odin's beard would you put such feature or what-have-you in the title? The worst? The game throws this on random, several occasions. Add to that the fact that it does very little to its gameplay. Due to stealth, your given abilities are a bit stifled which usually happens whenever the game activates stealth. Perhaps, if this one here is removed, consistency will follow. After all, players want to experience every fight, as it's one of the reasons why they bought the game at the first place.

Please, Chapter 13 Is Just Too Long And Boring

Chapter 13 is arguably the lengthiest chapter in Final Fantasy XV. Ironically, players will have to fight alone without the help of the three other dudes. That means going in and out of the fight as Noctis -- alone. This chapter, in a sense, feels like a drag on the entirety of the game. It feels like a different team of devs did it. It just doesn't add up. But of course, it doesn't mean it shouldn't be part of the game. Maybe, in the future, Square Enix can resort into shortening it and making it precise and bold.

Despite the game being quite detailed, it's still a simple action-based combat style game. In its most organic form, it lets players attack and/or evade enemies -- all done in real time. From using magic spells to switching weapons to teleporting, these are all but the basics of the title. Unfortunately, one that doesn't jive well to these features is the camera system. It's just uncooperative. One can't seem to enjoy and appreciate the moves Noctis tend to do whenever he attacks or defends. Probably a more withdrawn and locked on camera system will do the job.

What are your thoughts on the aforementioned fixes for Final Fantasy XV? Do you agree with some of them? Any other fixes that you can suggest? Be sure to share your answer at the comment section below!

Final Fantasy XV Guide: How To Fish Like A Pro

Having a hard time acquiring the best catch when fishing in Final Fantasy XV? Well, you need to check out this guide!

Final Fantasy Guide: How To Easily Upgrade Your Regalia

Want to pimp your Regalia ride in Final Fantasy XV? Check out this guide now!

Final Fantasy XV Guide: Complete List Of Best Weapons And How To Get Them

Looking to acquire the best weapons in Final Fantasy XV? Check out this guide now!