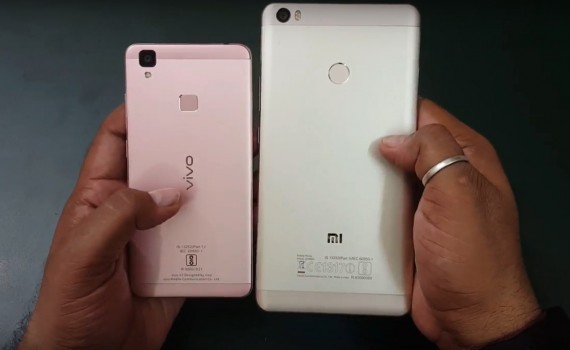 The Vivo Y53 4G VoLTE and Xiaomi Mi Max 2 are two smartphones expected to be released this year. With that being said, here is a list of everything we know so far about the said phones. (Photo : TechTag/YouTube)

Set to be released this year are the Xiaomi Mi Max 2 and Vivo Y53 4G VoLTE smartphones, which were reported to offer quite amazing specs. With that being said, what are the latest news, rumors and leaks about these said phones?

The Xiaomi Mi Max 2's expected retail price is still under wraps as of now. As for the Vivo Y53, this smartphone is reported to cost MY 699, which translates roughly around $157.

The Xiaomi Mi Max 2 is rumored to possibly launch in China around the month of May, the specific date is yet to be disclosed. On the other hand, the Vivo Y53 was just launched recently in Malaysia and is expected to be offered soon in other countries as well, such as Vietnam, Thailand, Indonesia, Myanmar, Philippines and India.

The Xiaomi Mi Max 2 is said to feature a metal built unibody design. Meanwhile, the Vivo Y53 features a body dimension of 144.2 x 71.4 x 7.64 mm and weighs 137 grams. Other reports include that its casing color designs comes in two variations: crown gold and space grey. The smartphone also offers dual SIM card slots, an additional microSD card slot and an Eye Protection Mode feature, which can be enabled to filter out the harmful blue light.

The Xiaomi Mi Max 2 is rumored to run on Android 7.0 Nougat with the latest MIUI on top of it and will be packing a Snapdragon 660 chipset. With the Vivo Y53, this smartphone runs on Android 6.0 Marshmallow with a highly customized FunTouchOS 3.0. However, it also offers a multitasking option, which is introduced by default with the latest Android 7.0 Nougat. The phone is equipped with a 64-bit Snapdragon 425 Quad-processor clocked at 1.4 GHz with an Adreno 308 as its GPU.

The Xiaomi Mi Max 2 is said to feature a 13 MP rear camera and an 8 MP front camera. On the other hand, the Vivo Y53 offers an 8 MP rear camera with an aperture of f/2.0 and LED flash. Its front camera is a 5 MP shooter with f/2.2 aperture and supports screen flash.

Powering the Xiaomi Mi Max 2 is rumored to be a 5,000 mAh battery and the device will also have a fast charging support. As for the Vivo Y53, it houses a 2,500 mAh battery that is said to give the phone a decent battery life due to its mid-range specs.

Both set to be released this year, the OnePlus 5 and HTC One X10 are rumored to be high-end smartphones packed with amazing specs and features. However, the OnePlus 5 is more powerful.

Xiaomi Mi Max 2 is a mid range smartphone with some top class features and specs.

Xiaomi announced a couple of days ago a new Matte Black variant of the Mi Max 2 phablet that was originally available only in golden color.